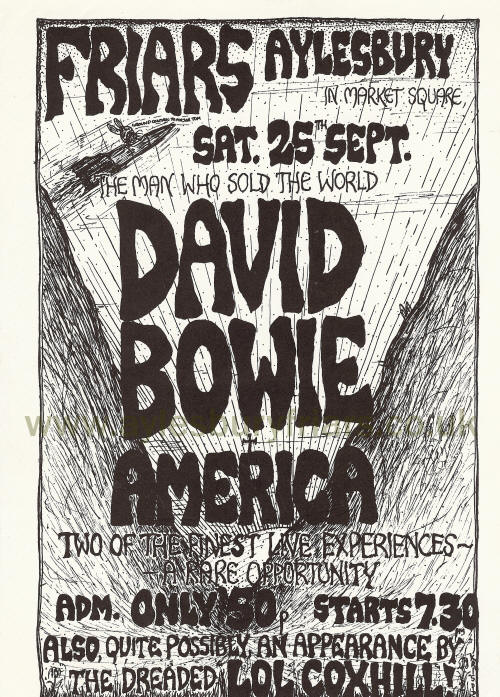 The third disc in this collection, subtitled, “The Journey to Hunk Dory,” consists of a fairly short radio concert from the BBC show, “Sounds of the 70s with Bob Harris” (recorded in September, 1971), and the recording of a concert at a club called Friars Aylesbury from the same month. Friars Aylesbury is still up and running, advertising itself as “Europe’s biggest music club out in the sticks.” The sound quality and energy level for the first part is weaker than the second part, and even within this one disc Bowie seems to evolve as a performer, which is also evident in the context of listening to the first three discs in order.

There’s not much to say about the “Sounds of the 70s” part— all the songs, except for “Amsterdam,” are live versions of songs that appear on Hunky Dory. “Amsterdam” is common enough, despite not appearing as an official inclusion on any of his studio albums. It really isn’t a great song, so its repeated inclusion on these discs— twice on this disc alone— is maybe a little too much.

Bowie elevates his game with the Friars concert. Whoever was the emcee concludes the concert by saying that because of the concert, that had been “one of the greatest evenings of my life…with some of the finest musicians and people I’ve ever met.” The audience demanded a second encore from Bowie, but an exhausted-sounded Bowie protested that he and his band performed everything they had reversed and “killed [himself] singing,” which struck me as out of character.

But his performance was certainly energetic. The encore performances were two covers— Chuck Berry’s “Round and Round” and the Velvet Underground’s “Waiting for the Man.” These are the strongest inclusions on the disc. “Round and Round” sounds like a precursor to “Suffragette City” and “The Jean Genie.” Bowie would continue to cover the Velvet Underground into his later live performances, but this one comes off as especially seedy, signaling the subversive quality of Bowie’s own music. That’s in the lyrics of two of the lesser-known songs on this disc, “Looking for a Friend” and “Buzz the Fuzz,” but “Waiting for the Man” really has the feel.

“Looking for a Friend” is a song I had not heard before the first disc in this collection but now had appeared on all three (so far). Apparently its a song Bowie was performing at the time. It’s one of his most overtly gay-oriented songs— maybe it was too overt to carry into his later career? One set of lyrics is offensively sexist, suggesting that women are “too busy having babies” to have boyfriends, who instead turn to other men…perhaps even by the end of 1971 Bowie could see problems with this song.

“Buzz the Fuzz” is far worse. It’s a bad song. It’s supposed to be a funny, pro-drug song (featuring a character named “Alice Dee”— the poor man’s version of “Lucy in the Sky with Diamonds”). Musically, it has a bouncy, music-hall feel that’s fairly out of place with the rest of the songs here. I had never heard this one before, so this is the most unique inclusion on the disc. Unfortunately it just isn’t very good.

Most of the other songs are from Hunky Dory (except for “The Supermen”). These versions sound familiar. The performances were strong. The journey to Hunky Dory is one step closer to its destination.

Instead of linking this post to a song, I’m including a reproduction of a hand-drawn sign advertising the Friars concert, taken from the club’s current website. Bowie’s marketing would subsequently become more sophisticated!